A Radar Station is a building in the game Crystalien Conflict used by the humans. It costs 1000 crystals and, once built, gives a satellite view of the entire battlefield, providing the dark shroud covering it has been penetrated by vehicles or ground units.

The radar station takes up four times as much space as a power plant. It has two long white beams lined with blue lights that act as a runway and containment area for Astro Fighters. The back of the station is built up above the two beams and has two radar dishes located on it, on larger than the other and both moving side to side. A single human is visible at the controls.

If enough power plants are present and there is no shortage of energy, the radar station can provide an overhead view of the battlefield, showing humans as white squares and aliens as black ones. The size of the square depends on the size of the building, vehicle or ground unit being viewed; human and alien units are little more than dots while motherships and command bases are large rectangles filling a considerable amount of space.

Once the radar station is enabled, Astro Fighters are able to be spawned, with four fighters being maximum amount at any given time. These fighters can be selected as a group or individually and, once a target has been acquired, fly off and release a volley of heavy blaster fire before automatically returning to the radar station. These hit-and-run attacks can inflict a large amount of damage to any structure and the fighters have on occasion been known to slip past defense turrets largely unscathed.

Additionally, when built the radar station allows another vehicle to be built by the vehicle factory: the claw tank. 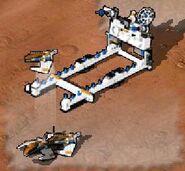 A group of astro fighters attacks a dragon cruiser. Note the radar screen on the left
Add a photo to this gallery
Retrieved from "https://brickipedia.fandom.com/wiki/Crystalien_Conflict/Radar_Station?oldid=1269080"
Community content is available under CC-BY-SA unless otherwise noted.