Agent Dagger is the imagined alias of Eagleeyedan. He is the main character in a series of stories made up by EED and maybe someday movies.

Originally just an ordinary kid named Kevin Mitchell, he was kidnapped by a man named Blackjack because of his ingenuity for making inventions. Blackjack taught Kevin a lot about making high tech weapons and hijacking computers. His intent was to turn him into a super hero for his own cause but it backfired on him.

Using his new knowledge, Kevin escaped from his cell by opening a panel in his cell wall and hacking into the lock system. When he freed himself, he also freed another person who had been kidnapped, Alice Harper, who Black Jack had been training in self defense and martial arts. Together they escaped but in a dogfight crash, Kevin lost his right arm. Back at home, he was re-united with his family so he and Alice went their separate ways.

Kevin turned a portion of his basement into a lab where he used his knowledge of electronics to make himself a prosthetic arm to replace the one he lost. This arm was not an ordinary arm though and had many special features. He then began work on his other gadgets. Soon, the basement wasn't big enough for his work so he dug a new underground lab under his basement and his neighbor's as well. He used his computer, dubbed SASHA, to assist him in his plans and eventually finished his final super suit. He came up with his secret name, Agent Dagger, based off an old family legend of a flaming Dagger, Pelarus - but the story of Pelarus is for another time.

Dagger as seen in LDD

Dagger when he was still just a kid. 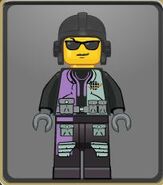 Agent Dagger as an avatar in MLN

David in the desert prison 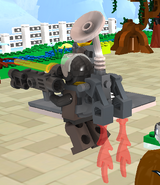 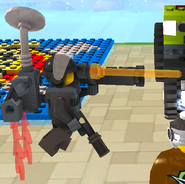 Retrieved from "https://brickipedia.fandom.com/wiki/Custom:Agent_Dagger?oldid=1549617"
Community content is available under CC-BY-SA unless otherwise noted.