Alien Command Base is a custom Space set created by Wertys under Wertys Productions.

The set includes 39 minifigures. It includes a Space Rover, two small Astronaut speeders, two UFOs, two towers, and the base. The Space Rover is designed to carry up to five troopers. It has six wheels and can drive very fast. The two Astronaut speeders have mini guns on the front and can "float" above the ground. The UFOs are either blue and green or green and blue. One has antennas, the other a satellite. The towers are coloured green/blue also. They have openings in the top for the snipers to fire. The base features five main rooms. The main room has a green desk by the front door. To the other side of the front door is a teleport to go to the second floor. The front room also has a hologram, seats, and weapon racks. The next room is the Alien Laboratory. This room has two lab coats off to the side. Inside are two scientists and some tables with tools and miniature creatures on it. There is also a blue oxygen chamber housing the hostage Astronaut. The next room is the Commander's Room. In here are two seats, a big, green chair for the commander, and weapons. There is also a rack of alien bones. The second floor has two rooms. There is a room with a giant black cage housing 8 Alien pets. This room also has some seats and a teleport to go to the first floor. The other room has a table and the Base's control panel. There are two towers on top of the base, identical to the towers outside of the base. 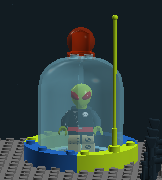 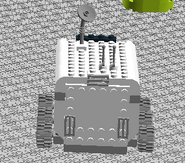 Retrieved from "https://brickipedia.fandom.com/wiki/Custom:Alien_Command_Base?oldid=1480034"
Community content is available under CC-BY-SA unless otherwise noted.