Duel on the Rainbow Bridge

Duel on the Rainbow Bridge is a Sparrow9988 custom in his Thor theme.

Thor arrives in Asgard and fights Loki before he destroys the Rainbow Bridge. He fails, but Odin awakens and prevents the brothers from falling into the abyss created in the wake of the bridge's destruction, but Loki allows himself to fall when Odin rejects his pleas for approval. 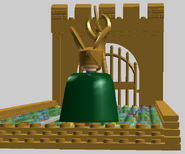 Retrieved from "https://brickipedia.fandom.com/wiki/Custom:Duel_on_the_Rainbow_Bridge?oldid=1534651"
Community content is available under CC-BY-SA unless otherwise noted.