Link is a custom Minifigure from Nintendo created by Wertys under Wertys Productions.

V.1 Link wears his green Kokiri tunic and legs. His shield and sword are grey. His face is flesh-coloured, and his hair is blonde. He wears a green, flowing hat on his head.

V.2 Link wears his green Kokiri tunic and legs. He wears boots, also. His hair is blonde, and his face is stern. He carries a grey and blue Master Sword and a Hyrule Shield. He has a Deku Stick on his back. His torso was custom-printed and painted.

Link is the protagonist of the the Legend of Zelda series. He is usually depicted as a courageous young boy or teenager in green clothing who leaves his home and any relatives to pursue his destiny: fighting the evil forces threatening the land. On his journey, he learns to make use of many different weapons and items to adapt to, and overcome, the enemies and obstacles in his path. After navigating both a game's Overworld and its dungeons, Link ultimately vanquishes his enemy and becomes a legendary hero. He is considered an iconic character in video gaming and the very symbol of the Zelda franchise, and remains one of the most popular video game protagonists. 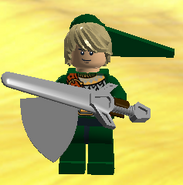 Link's Minifigure Inventory (LDD)
Add a photo to this gallery