Rodney is a man of action and battle yet he also is very shrewd, example: when Will expresses concern of him getting all the praise after the boar hunt while Horace who played a key part in that conflict got none. He does away with that fear after he finds that Sir Rodney is very intelligent and saw Horace that protected Will. 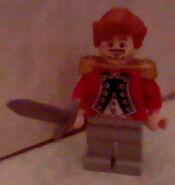