The Super-Adaptoid is a android created by Justin Hammer that copies the powers and equipment of any superpowered being. It was defeated by Captain America, but was recovered by M.O.D.O.K. and reassembled. 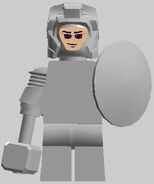 The other side of the head for the Hammer variant.
Add a photo to this gallery
Retrieved from "https://brickipedia.fandom.com/wiki/Custom:Super-Adaptoid?oldid=1546561"
Community content is available under CC-BY-SA unless otherwise noted.