"Imagine evil, fear, and nightmare, but in physical form, and you get a Temrpothraxii". -Thegreengrappler

"Fear? What is "Fear", well to put it simply, Us." -Temprothraxii leader.

Temprothraxiis are a skeletal white species with clawed hands and feet, a visible ribcage and two organic blades coming from each wrist, with the right one pointing forward and the left one pointing backwards.

Temprothraxiis are an advanced species that ruled earth about 100 years before humans existed, but when humans came they hunted down all the Temprothraxiis due to believing them to be evil. Once the Human/Temprothraxii war was over the 13 black Temprothraxii that remained lost the war, all of them plotting their revenge. Later 7 white Temprothraxii were created in various laboratories. 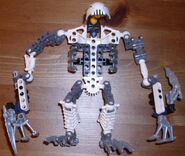 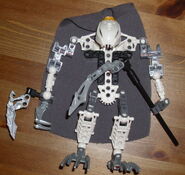 Retrieved from "https://brickipedia.fandom.com/wiki/Custom:Temprothraxi?oldid=1289060"
Community content is available under CC-BY-SA unless otherwise noted.