Xsizter
The Homer (also known as "The Car Built for Homer") was a car designed by Homer Simpson when his half-brother, Herb, gave Homer a job at Powell Motors. It is a parody/exaggeration of the Edsel, a similarly disastrous automobile designed by Ford Motor Company.

Thanks to Homer's dislike of the cars Herb's company was creating, Herb decided his company needed a new car that would appeal to the "average" American. Unfortunately, Homer's views on an ideal car was much different than that of an average American. Despite the many objections of Herb's employees, Herb encouraged Homer to follow his instincts in creating a car that American consumers would want to buy. Homer took charge of the project after Herb encouraged him to obey his gut when it came to what kind of car he wanted. Unfortunately, Homer's creation was such a monstrously strange car, cost so much to develop, and had such a high price tag (Approximately $82,000), that Herb's car company went out of business shortly after, with its building purchased by Komatsu Motors. When The Simpsons were driving back to Springfield, Bart told a dejected Homer he thought it was pretty cool.

The inside of The Homer

Another view of the homer 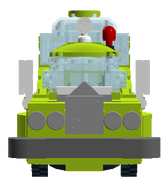 The front view of The Homer 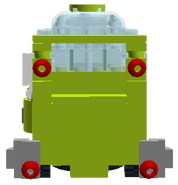 The back view of The Homer
Add a photo to this gallery
Retrieved from "https://brickipedia.fandom.com/wiki/Custom:The_Homer?oldid=1696582"
Community content is available under CC-BY-SA unless otherwise noted.
... more about "The Homer"
RDF feed
Creator
Xsizter +
Img1
Homie Homer.png +
Txt1
Homer Simpson +