Thor fights to save both Asgard and Earth from the wrath of fiends such as the Frost Giants, and the Dark Elves; but mainly from his adopted brother Loki, son of the Frost Giant Laufey. 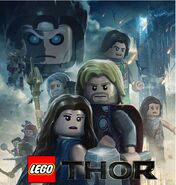 A poster promoting the theme.
Add a photo to this gallery
Retrieved from "https://brickipedia.fandom.com/wiki/Custom:Thor_(Theme)?oldid=1561352"
Community content is available under CC-BY-SA unless otherwise noted.