Ward's Helicopter Escape is a Sparrow9988 custom in his Agents of S.H.I.E.L.D. theme.

Discovering a false room behind a fireplace Agent Ward retrieves a classified object that S.H.I.E.L.D. has been recently searching for. However, he is discovered and attacked by two men. After defeating them in a fight he escapes by helicopter. 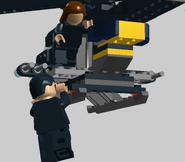