Cute Little Devil is a Minifigures Series 16 minifigure released in 2016. 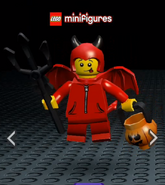 Tail +
Appearances
71013 Minifigures Series 16 LEGO Quest & Collect +
ArticleRating
unrated +
Image
cute Little Devil 71013.jpg +
InfoboxTemplate
Minifigure +
ShopDescription
“It wasn’t me!” The Cute Little Devil is … “It wasn’t me!”</br></br>The Cute Little Devil is one adorable mischief-making kid. Whether he means to or not, he’s constantly causing trouble around the neighborhood. It’s no wonder that he decided to dress up like an imp for Halloween…or that he had so much fun that now he wears the costume all the time!</br></br>The Cute Little Devil isn’t exactly trying to be bad. It’s just that sometimes he hits the baseball the wrong way, or accidentally knocks over the paint can, or opens the window when there’s a pie cooling in the kitchen and a flock of crows outside. Anyone could make those mistakes, right? It sure is lucky he’s just so cute that nobody ever stays mad at him for long!hat nobody ever stays mad at him for long! +
Theme
Minifigures (theme) +
Title
Cute Little Devil +
Years
2016 +