Cutler Beckett was an agent of the East India Tading Company. Sarcastic, ruthless, manipulative and a man of business, he was the one who branded Jack Sparrow a pirate. As time went on he rose to become chairman of EITC and rank of "Lord". His right hand man was Mr. Mercer.

In The Curse of the Black Pearl, it is revealed that Jack was branded a pirate by the East India Tading Company and the nhe escaped under the eye of twelve of their agents, one of them likely being Beckett.

In Dead Man's Chest, he arrives at Port Royal, interrupts the marriage of Will Turner and Elizabeth Swann carrying the death warrants for both of them and James Norrington for freeing Jack Sparrow previously. Beckett imprisons Elizabeth and Will. Beckett makes a deal with Will to free him and Elizabeth in exchange for Jack Sparrow's Compass, promising that Jack would be considered a privateer. Elizabeth manages to escape and find Beckett. Elizabeth holds Beckett at gunpoint and forces him to divulge information. He reveals to her that he's after Jack's compass, but not what he plans to use it for. She then forces him to sign and seal letters of Marque that ensure the freedom of Will and Elizabeth. Elizabeth then sets off to find Jack and Will. Beckett sends Mercer to Tortuga to get information about the Black Pearl. When Mercer returns to give his report, Beckett summons Governor Swann to hear it. Mercer claims that the armada would soon find and destroy the Black Pearl and everyone on it. Beckett promises that Elizabeth would not be harmed if he gave Beckett his status and Governor, his influence in London, and his loyalty to the EITC. Governor Swann, ignorant to the fact that the Black Pearl is almost uncatchable, agrees. After several days, James Norrington is captured and brought before Beckett. Norrington then trades the heart of Davy Jones to Beckett for his freedom.

In At World's End, he seeks to eradicate piracy forever by having Davy Jones use his ship, The Flying Dutchman, to destroy all pirate ships. Fearing that Jones may turn against him, Beckett commands Jones to kill his pet, the Kraken. When he learns that international pirates are gathering from around the world to summon the Brethren Court, Beckett brings together his entire armada with the Dutchman and his ship, The Endeavour at the helm. Former Governor Swann begins asking questions about the Heart of Davy Jones, so Beckett has him killed. Sao Feng hands him Jack Sparrow in exchange for the Black Pearl, however Beckett betrays Sao Feng and keeps the Pearl. Beckett tried to gain information from Sparrow, while interrogating him in his office, but Sparrow's inordinate terms reminded Beckett of Sparrow's compass, the use of which would render Sparrow unnecessary. Sparrow, however, pointed out that since Beckett wanted Sparrow dead more than anything in the world, Jack's compass would only lead to Sparrow. When Beckett suggested killing Sparrow to "cut out the middle man", Sparrow pointed out that if Beckett simply killed him, he would then find the meeting place of the Brethren Court, Shipwreck Cove, but he would have to blockade the island and spend countless resources in the process. Sparrow proposed that Beckett release him, so that he could lead Beckett to Shipwreck Cove, and draw the pirates out. Beckett agrees but at that moment, Sao Feng and Hector Barbossa attack The Endeavour, allowing Jack to escape. While they make their escape, Will Turner, seeking all possible options to free his father from Jones, leaves a 'bread crumb trail' for Beckett to bring them to Shipwreck Cove. When Jack sees this is assisting his plans, he pushes Will overboard where he is picked up by Beckett. Will makes a deal with Beckett and Jones that for leading them to Shipwreck Cove, and for the eventual killing of Calypso, Will and Elizabeth will be allowed to go free, and Bootstrap Bill Turner will be set free. Before the final battle, parlay is called, and Beckett, Jones, and Will meet on a sandbar with Jack, Barbossa and Elizabeth. They make an exchange of Will for Jack, and then prepare for the final battle. The pirates send The Black Pearl to face off with The Dutchman, causing both of them to be trapped in Calypso's Maelstrom. In the proceeding battle Davy Jones is killed and Will becomes the captain of the Dutchman. When the Dutchman returns to the surface, it joins the Black Pearl and they both broadside The Endeavor. Beckett is shocked by the attack and the failure of his plan. Stunned, Beckett remains aboard the Endeavor as it explodes around him, thus killing him. Without a leader, his armada retreats and the Brethren are victorious. 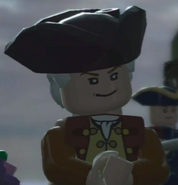