Cyborg Superman is a Super Heroes minifigure who appears in LEGO Batman 3: Beyond Gotham.

Hank Henshaw was an astronaut who was exposed to radiation alongside his crew. Superman tried to save them to no avail, but while the radiation destroyed Henshaw's body, his disembodied mind got the power to control machines as new bodies.

Henshaw eventually blamed Superman for his crew's deaths, and when the hero fell saving Metropolis from Doomsday, Henshaw adopted a Cyborg Superman look to pretend to be the hero back from the dead. His plan was to turn Earth into a new version of the Warworld warship and have the universe "know" it was Superman who did it, but he was stopped by a revived Superman, Superboy, Steel and Hal Jordan.

Cyborg Superman, along with Composite Superman and Solar Suit Superman , are unlocked via free play, in the mission "Breaking the Ice". 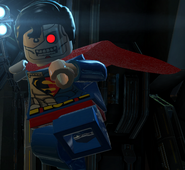 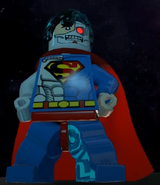