Cyclops is a Marvel Super Heroes minifigure that appeared in 2014.

In 2014, he was physically released in his 1970's Second Generation outfit. He has a bald earth blue head printed with his gold goggles with a red oval in the middle, his neutral mouth is visible trough the mouth hole, and lines to give the mask shape which continues onto the back of the head. The torso is all earth blue with yellow hands and is printed with the suit's cut on his body and a red belt with a yellow X-Men insignia for a belt buckle. The back is printed with the continuation of the belt and the suit's cut on the back. His hips are yellow with earth blue legs.

Cyclops has tousled ginger hair and light blue for the rest of his body, minus his hands and hip which are yellow. The head is printed with his laser eyepiece and his mouth showing trough the mouth-hole. The torso is printed front and back with a shoulder belt crossing over his body connected with "X" buckle, a belt with pouches and an "x" belt buckle, and the suit's cut on his body. His legs are printed with the extension of his shorts, straps on his legs, and yellow boots.

This version has an all dark blue body. His bald head is printed with his silver eyepiece and a large red line in the centre and a large mouth hole with a simple smile. The torso is printed with two thin yellow lines starting at his arms and curving down at his knees, the suit's cut on his body, and a yellow belt with "X" belt buckle. The back is printed the suit's cut on his back and the continuation of the belt.The legs feature thin horizontal yellow lines to represent the start of his boots.

Scott Summers was the son of a fighter pilot. Scott moved to an orphanage when his father died in a plane crash. At the orphanage, Scott accidentally vaporized an employee, realizing that he could shoot powerful energy blasts from his eyes. He was found by Professor X and was taught how to use his powers for good. He was given sunglasses and a visor, both had ruby-quartz lenses that allowed him to control his powers and produce the beams safely. He then became Cyclops, the leader of the X-Men and one of the five founding members of the X-Men along with Archangel, Iceman, Beast, and the love of his life, Phoenix. He is also the older brother of fellow X-Man Havok. He would end up serving as the group's field leader for years to come, frequently clashing with his teammate Wolverine. 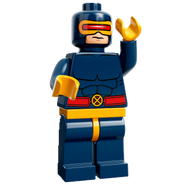