Brickipedia
Register
Don't have an account?
Sign In
Advertisement
in: Class 2 articles, Minifigures (theme), Minifigures introduced in 2013,
and 3 more
English

Cyclops is a Minifigures Series 9 minifigure released in January 2013.[1] He also appears in LEGO Minifigures Online, and made a very small cameo in The LEGO Movie.

The Cyclops was a mythical monster who lived in the islands of Greece. 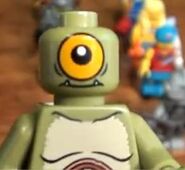 The Cyclop's face under the head piece 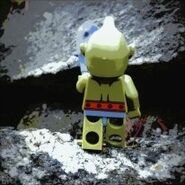 Deutsch Français
Community content is available under CC-BY-SA unless otherwise noted.
... more about "Cyclops (Minifigures)"
RDF feed
Accessories
Club (Medium Stone Grey) +
Appearances
71000 Minifigures Series 9 +
ArticleRating
2 +
Image
Cyclops.jpg +
InfoboxTemplate
Minifigure +
ShopDescription
“I've got my eye on you.”
For … “I've got my eye on you.”<br />Forever watchful and alert, the Cyclops is the only inhabitant of a distant, uncharted island. He stares out to sea with his one unblinking eye, roaring at anyone who sails too close to the shore. But although he looks big and mean, he secretly hides a very sensitive soul beneath his scowling exterior.Who wants to be a monster all the time? There isn’t a lot to do when you live all alone on a deserted island, so the Cyclops spends most of his spare time writing poetry and building sculptures out of driftwood and seashells. He hopes to one day find a friend who really understands him – and with whom he can finally see eye-to-eye!" with whom he can finally see eye-to-eye!" +
Theme
Minifigures
Series 9 +
Title
Cyclops +
Years
2013 +
Advertisement