Brickipedia
Register
Don't have an account?
Sign In
Advertisement
in: Class 2 articles, Minifigures introduced in 2012, Minifigures (theme),
and 2 more
English

"You haven’t heard anything yet!"
―DJ

The DJ is a Minifigures minifigure released in 2012. He also appears in LEGO Minifigures Online.

The DJ has dark blue legs, printed with a black belt and pockets. His torso is dark bluish grey, and printed with a design in the shape of a minifigure head made out of pixels. He has dark green arms, and yellow hands. He has a yellow head, printed with a wide, smiling expression. He has untidy black hair, with silver headphones moulded into it.

The DJ briefly appears as Emmet is stating "and the Octan Corporation, they make lots of cool stuff". When Emmet mentions Octan's music, the DJ can be briefly seen in the background. The actual minifigure was used for the image because real-life minifigures and LEGO bricks were used for when Emmet describes Octan. 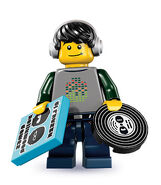 Deutsch Français
Community content is available under CC-BY-SA unless otherwise noted.
... more about "DJ (Minifigures)"
RDF feed
Accessories
Record, Record sleeve +
Appearances
8833 Minifigures Series 8 +
ArticleRating
2 +
Image
MS8_DJ.jpg +
InfoboxTemplate
Minifigure +
ShopDescription
“You haven’t heard anything yet!”<br … “You haven’t heard anything yet!”<br />The DJ is the number-one disc jockey in town. Call in with a request for a song, a band or a style of music and he’ll not only play it, but tell you everything you could want to know about it, too. Even though he lives in the era of CDs and MP3s, he’s got a deep love for classic rock ‘n roll on vinyl, and even keeps complete collections of some of his favorite artists on his shelves at home.The DJ’s favorite fellow minifigure is the Disco Dude. They may not share all of the same musical tastes, but he’s got to admit that the guy really knows how to dance. That’s why he’s seriously considering launching a disco hour on his show – at least on a trial basis!r on his show – at least on a trial basis! +
Theme
Minifigures
Series 8 +
Title
DJ +
Years
2012 +
Advertisement