DJ Jackitt is a radio DJ who appears in LEGO Island 2: The Brickster's Revenge and Island Xtreme Stunts.

In the PC and Playstation versions of LEGO Island 2 he is located at the radio station, where he initially gives Pepper bricks for his house. Later on, Pepper visits and gets a radio from him to defeat the Brickster-Bots. In the Playstation version, he wears Jonathan Ablebody's shirt.

DJ also appears in the Game Boy Advance version of the game. After Pepper rebuilds the radio station, DJ has Pepper find the pieces to the antenna.

DJ Jackitt can be found at the radio in this game, occasionally doing yoga with Dr. Clickitt there, and also heard on L.E.G.O. Radio. During one of Snap Lockitt's lines in the game, he mentions DJ is his uncle.

At one point during the development of LEGO Island 2 he was known as DJ Ablebody,[1] implying a connection to Jonathan Ablebody from 5706 LEGOLAND. The Game Boy Advance version also internally references him as DJ Dee.[2]

Despite him not appearing in the Game Boy Color port of LEGO Island 2, he was considered for a potential appearance in the port.[3] Additionally, comments for this seem to discuss the differences between the designs of DJ Jackitt and Mr. "DJ" Radio from LEGO Island. Directly, Wes Jenkins, the creative director on LEGO Island, wanted an "AM DJ" character, while Tim Green, the producer of LEGO Island 2, wanted a "'bleeding edge' hip mix Meister."

The LEGO Island 3 Character Bible,[4] used for reference during the development of Island Xtreme Stunts, mentions that he owns a dog and is from California, which is beyond the Phanta Sea. 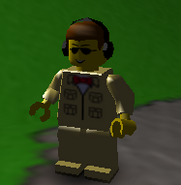 DJ Jackitt in the PC version of LEGO Island 2

DJ Jackitt in the Playstation version of LEGO Island 2