Daredevil is a Marvel Super Heroes minifigure that was released in 2021.

As a child, a chemical accident left Matthew Murdock blinded for life. Although he lost his sight, his other senses became heightened, allowing his hearing and sense of smell to develop into radar vision. Lawyer by day, hero by night, Matt works hard to save New York from crime and corruption. Using his gifts and his training, he became Daredevil: the man without fear. 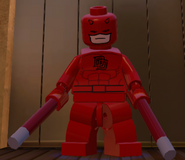 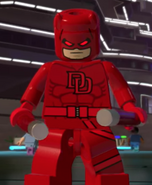