The figure comes attached to a round cardboard sheet designed to look like a sewer cover. There is a light green 4x4 brick attached, which the back of the minifigure's legs are attached to.

The Dark Turtle, also known as Shadow Leonardo, is a black version of one Leonardo. The figure has black legs with silver printing to look like the turtles' kneepads and the bottom of their bottom shell. He has a black torso with black hands. The front of the torso has the same-coloured silver printing designed like the turtles' shell. The printing is separated into four block quadrants with a black small line in between each shell-piece. There is also darker grey printing for his belt, and a shoulder-strap. The hip area is painted silver with a small black line down the middle to mark the separate shell sides. There is a specialized turtle shell piece which fits over the neck and between the torso and head piece. It has grey straps wrapped around to match and fit nicely with the straps on the front. The Dark Turtle features a new headpiece design, which is oval shaped and wider than regular heads. The headpiece is almost fully black, with a blue bandanna covering his white eyes tied in a knot in the back with the ends hanging down over the top of the shell-piece. There is a painted mouth which is shaped so the figure appears to be growling and angry, showing his white teeth.

The minifigure also comes with a black skateboard with a a sticker on top that says "New York" in blue letters, "Comic Con" in red letters, and the event's dates: "October 11–14, 2012" in yellow. The skateboard comes attached to the figure's right hand. 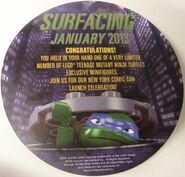 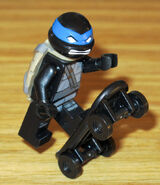 The back of Leonardo
Add a photo to this gallery