"People of Earth! I have come for your world. Resistance is futile. Your defeat is inevitable."
―Darkseid in LEGO DC Super-Villains

Darkseid is a Super Heroes minifigure who appears in LEGO Batman 3: Beyond Gotham DLC, as well as the base version of LEGO DC Super-Villains. An unfinished version of Darkseid also can be found in the game files of LEGO Batman 2: DC Super Heroes. He was physically released in 2015.

He is an enemy of Superman, arch-enemy of the Justice League and ruler of the post-apocalyptic world, Apokolips. He is one of the most dangerous villains in the DC universe, being immortal and nearly omnipotent. Darkseid plans to turn Earth into a copy of Apokolips and become it's ruler. His one true weakness is he is vulnerable to his own Omega Beams (his laser eyebeams) but because he can change their direction at will, he is difficult to harm.

His minions include Desaad, Kalibak, Lashina, Mad Harriet, Steppenwolf and a Parademon army, among others. 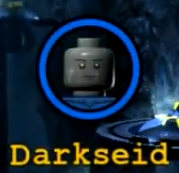 Darkseid's Token in the Game Files 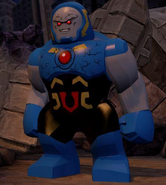 Appearance in LEGO Batman 3: Beyond Gotham