Darth Vader is a Star Wars minifigure introduced in 1999 as part of the Classic Star Wars line. Since 1999, He has had 14 variations to date. He is the husband of Padmè, Sith apprentice to Emperor Palpatine, the father of Princess Leia and Luke Skywalker, the father-in-law of Han Solo and the grandfather of Kylo Ren.

Darth Vader has appeared in a total of seventeen sets, being recognized as one of the most frequently packaged minifigures, but he is not even close to Luke Skywalker who appears in twenty-eight sets. He is considered the representation of the LEGO Star Wars line to a certain extent, after the fact that Darth Vader is the most well known Star Wars character, and has been in all 6 movies. He was released in the set 8017 Darth Vader's TIE Fighter to symbolize the 10th anniversary of LEGO and Star Wars. His helmet was on the box art of the Star Wars Episode III: Revenge of the Sith line.

Darth Vader (formerly Anakin Skywalker) was once a Jedi Knight and expert pilot trained by Obi-Wan Kenobi, but his emotions (mostly for Padme) caused him to give in to his anger and aggression, leading to him being turned to the Dark Side of the Force by Emperor Palpatine. This new path caused him to join the Sith and resulted in a duel with Obi-Wan. Vader lost this duel, which resulted in him having to permanently wear body armor and a life-support system.

Vader soon became a feared leader of the Empire. He became an enemy to the Rebellion. He killed many Jedi and Rebels for arround thirty years. He had a son and a daughter, Luke Skywalker and Princess Leia respectively. However, due to complications, he did not know Luke was his son until after the first Death Star blew up, and he did not know Leia was his daughter until the day he died. Darth Vader dramatically told Luke "I am your father" in Cloud City, when they dueled at the climax of Episode V. During the same duel, Vader was responsible for cutting off Luke's right hand. Soon the the two met again for a final duel. Luke won the duel but Palpatine fired out Force Lightning at him. Anakin Skywalker (no longer Vader) saved Luke and threw Palpatine into the Reactor Core of the second Death Star, but died shortly after. Anakin was then seen as a Force ghost by his son.

This variant is almost identical to the original version except the grey on the head and torso outlines is updated to a light bluish grey color. This variant can be found in sets from years 2004-2007.

The 2010 redesign has the same legs, cape and helmet that the previous redesign used from 2008. The head has a new printing, introducing the pupils for the first time. Vader's torso buttons are coloured differently, too. This current variation is only available with the sets 10212 Imperial Shuttle, 7965 Millennium Falcon, and 10221 UCS Super Star Destroyer.

This variation is exactly the same as the Original Variation, but only his left arm, left hand, helmet and lightsaber blade can be removed. His hand is attached to his lightsaber. The lightsaber has a built in light, which lights up his lightsaber whenever his head is punched down. He has a built in battery. This minifigure is exclusive to 7263 TIE Fighter.

The 2014 redesign has the same cape and helmet that the previous redesign used from 2010. His head has a totally new printing, showing a tan color and his facial expression has completely changed. He now also has printings on his legs. This Minifigure has only appeared in the set 75055 Imperial Star Destroyer.

The Santa Darth Vader, introduced and only featured in the 2014 version of the 75056 LEGO Star Wars Advent Calendar, features new prints on the torso, hips and legs. Underneath the Santa-costume-printing, the print of the 2014 redesign can be seen. Mask and head are also equivalent to the 2014 version of the figure. Additionally, this design sports a red cape instead of a black one.

The 2015 redesign of the figure, introduced with set 75093 Death Star Final Duel in June, keeps the printing of the 2014 redesign completely from head downwards (excluding the head). The exclusive feature to this version is the new mold and concept for the helmet of the figure, as well as the head-print. The helmet now consists of two parts: a neck piece and the mask and helmet. The former being connected to the minifigure's neck and the latter connected to the head. The face features new printing on a white headpiece.

Darth Vader has appeared in seventeen sets, a large portion of which contain Imperial vehicles and technology; the most common is his personal TIE Advanced x1.

He has appeared in all five LEGO Star Wars Video Games. In LEGO Star Wars: The Videogame, he appears in the ending cutscene after completing Revenge of the Sith, and is playable in the bonus level "A New Hope", where he uses the same animations as Anakin Skywalker. In LEGO Star Wars 2: The Original Trilogy, Vader is playable in the penultimate level "Jedi Destiny", where he and Luke defeat Emperor Palpatine. In LEGO Star Wars: The Complete Saga, he makes the same appearances as in the first 2 games. In LEGO Star Wars III: The Clone Wars, Darth Vader is unlockable in both his classic variation, and his battle-damaged form after collecting all the mini-kits in a certain level. Darth Vader also makes a cameo in LEGO Indiana Jones: The Original Adventures, where his shadow can be seen in a cutscene, but in reality it is just the Grail Knight. 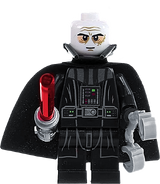 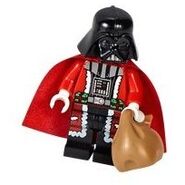 Darth Vader in LEGO Star Wars: The Force Awakens
Add a photo to this gallery