Dash Justice is the leader of the Alpha Team, and also is the motions expert. His colour is Black/Dark Blue/Blue, depending on the year. He is known to be very brave, but quite cocky in some situations. A known fact about Dash is that he loves the seaside.

In 2001, the Team's first year, Dash Justice wears an all-black jumpsuit which includes: several pockets, several lasers, the Alpha Team globe insignia, and a distinct button-up collar. His belt was blank, and his legs included pockets, and two textured pads. From 2002-03, when the Team travelled underwater, Dash wore the exact same jumpsuit—except for the legs—but in navy blue. He now had the standard "double-bar" colour scheme, with a triangular pattern running down the sides. In addition to that, he often wore a scuba tank and diving helmet. His face was slightly changed, giving him grey eyes and a different chin. From 2004-05, the Mission Deep Freeze part of the mission, Dash wore sunglasses, and a completely different outfit. His colour was now blue (Charge's previous colour), and his shirt patter was simpler, showing only a newer, triangular insignia, and several silver lines on the sides of the torso. He wore a silver belt, and several silver lines ran down his pant legs.

In 2016, an updated version of Dash was released as the Minifigures Series 16 Spy. 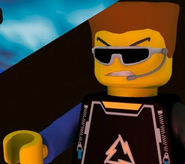 Dash in a cutscene of Drones' Menace 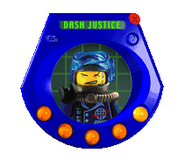 From the LEGO Desktop Minifigures