Dastan carries two swords, and can hold both of these swords on his back with a neck piece that was introduced with his minifigure. His bare chest variation is the same torso as the Enemy Boxer from the Indiana Jones theme. Dastan's face is similar to Indiana Jones' face, but has more hair on his beard. He has a double sided head, one smiling and the other with his teeth clenched. Dastan was included in all of the Prince of Persia sets. He is the first minifigure to have this type of hair.

Dastan grew up as an orphan living in the Alamut. However, he was soon adopted by the leader of the Persian empire, King Sharaman. Nizam, who is Dastan's uncle, murdered the king so that he would have control of the empire. Nizam blames Dastan for the King Sharaman's death, and Dastan is exiled from the empire. However, while being chased by Asoka, a military leader of the Persian army, Dastan stumbles upon Princess Tamina and the Dagger of Time, not knowing its true power. He spends much of the film helping Princess Tamina keep the Dagger safe from his uncle Nizam and his Hassansin spies.

LEGO.com posted a journal for Dastan as he went through his adventures. It included several animations as well. Read Dastan's Journal here. 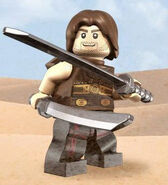 Dastan with a view from the back

Dastan on his horse 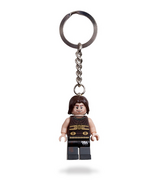 Dastan's key chain
Add a photo to this gallery