Brickipedia
Register
Don't have an account?
Sign In
Advertisement
in: Class 3 articles, Pages that link to Legopedia (Russian), Minifigures introduced in 2012,
and 3 more
English

Deadshot, also known as Floyd Lawton, is a Super Heroes minifigure who appears in LEGO Batman 2: DC Super Heroes. He is only available in handheld versions of the game, in which he is unlocked for purchase after finding the second minikit in Brawl at City Hall. He is also in LEGO Batman 3: Beyond Gotham. He was released physically in the 76053 Gotham City Cycle Chase set.

In LEGO Batman 2, Deadshot wears a boxy silver helmet with metal plating and a red-lensed eyepiece placed over his eye. He wears a red jumpsuit with his logo, a yellow targeting scope, on the right side of his chest. He wears yellow gloves and has a silver belt around his waist.

Deadshot is redesigned for LEGO Batman 3 with a more classic appearance. His headgear is no longer represented by a separate headpiece, but is instead designed on the head. It is not segmented, but appears tight with grey shadows over his monocole-less eye, cheeks, and mouth. He continues to wear a tight red costume, but it is split open at the chest to reveal layered metal. Likewise, segmented metal is visible when his shirt is cropped off at his abdomen. A similar, but more emphasized, target is on the center of his torso. Deadshot has a belt above his waist, and a pair of silver trunks on his legs. He wears yellow gloves and boots with matching bandoliers worn like bracelets around his elbows. His "wrist-mounted" guns are represented as handheld underhand devices with studs aligned with his palms as barrels. Deadshot is able to rapidly fire his guns at enemies and activate a special vision to search for hidden objects.

A version of Deadshot based on his appearance in The New 52 reboot is included in a DLC pack inspired by the Suicide Squad. Deadshot's helmet is again a separate piece, but is more detailed than his original appearance with tapering and more sophisticated contours. He also wears a pair of shoulder pads. Though not as plain as his original version, his costume is less busy than his regular-game version. A bomb collar is around his neck, yellow packets are over his heart, and a pattern of arrow-shaped metal armour begins under Deadshot's chest and continue down under his waist until it segues into a codpiece. His gloves and boots are again yellow, and while his wrist-mounts are constructed the same way, they are also yellow.

As a young boy, Floyd Lawton idolized his brother. One day his mother convinced his brother to kill his father. Locked outside, Floyd grabbed a gun so he could disarm his brother and save him from his grim future. He climbed onto a branch, but it broke and Floyd accidentally killed his beloved brother. Floyd became a sharpshooter under the name "Deadshot", and claims to have never missed a target. He first appeared in Gotham City as a new vigilante, with a plan to kill Batman and replace him. However, his plans were revealed and thwarted. Ever since, he has been an enemy of Batman and Gotham's other vigilantes and has teamed up with other villains against the Justice League.

Amanda Waller has recruited him several times in the Suicide Squad alongside Bronze Tiger, Captain Boomerang, an amnesiac Lashina, Poison Ivy and others, in exchange for a reduced jailtime.

Deadshot, along with Deathstroke and Mad Hatter can be unlocked during free play, in the mission "Big Trouble in Little Gotham".

The New 52 version of Deadshot appears in "The Squad" DLC. 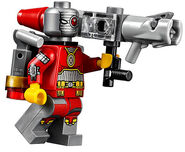