Demogoblin is a Marvel Super Heroes minifigure introduced in 2013.

After the 4th Hobgoblin Jason Macendale was constantly being beaten by Spider-Man, he offered his soul in exchange for power. Hobgoblin was possessed by demogoblin , but was incompatible with each other. The two fought for control of Macendale's physical form until the Demogoblin literally ripped away from its human host and began a separate existence. Demogoblin was a religious fanatic who had no interest in personal wealth or position. He was determined to destroy all sinners and thus gain redemption for himself. Since his definition of sinner was rather strict and exempted only children, he found himself in continual conflict with Spider-Man, Ghost Rider, Venom and even his former host, Hobgoblin. 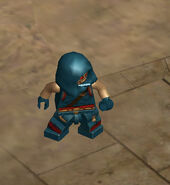