The Demolition Dummy, also known as simply Dummy,[1] is a minifigure that was released in 2010 as part of 8683 Minifigures Series 1 with him still making various LEGO media appearances in the years since.

This minifigure is based on a crash test dummy and comes with a wrench accessory, a "PA7 70" number plate printed on a 1x2 flat tile and black display stand. The dummy has a neutral expression and numerous crash symbols. The entire dummy is printed with a yellow flesh tone with black and grey printing. Its hips are also black.

The Dummy appears in LEGO Legacy: Heroes Unboxed as a tank with the abilities Wrench in Their Plans, Look BIzZz at BIzZz Me! BIzZz, Some Reassembly Required and We Can Rebuild Them...

He is notable for his ability to tank attacks thanks to Hardy, Payback and Taunt.

The Demolition Dummy appears in The LEGO Movie. He is among the Master Builders that meet in Cloud Cuckoo Land to see the special. When Vitruvius informs the Master Builders of Lord Business's plan he is seen getting scared and running behind Michaelangelo before being calmed down by Vitruvius.

After Emmet sacrifices himself, he is seen mourning him. He presumably took part in the battle of Bricksburg and the subsequent celebrations. 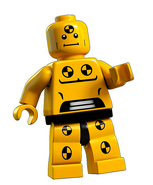 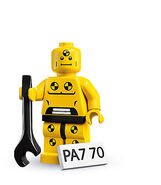 Demolition Dummy as seen in The LEGO Movie.

Demolition Dummy as seen in The LEGO Movie. 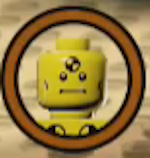 Deutsch Français
Community content is available under CC-BY-SA unless otherwise noted.
... more about "Demolition Dummy"
RDF feed
Accessories
Wrench (Black) License plate (PA7 70) +
Appearances
8683 Minifigures Series 1 +
ArticleRating
2 +
Image
DD1.jpg +
InfoboxTemplate
Minifigure +
ShopDescription
'“Disassemble! Demolish! Deconstruct!” … “Disassemble! Demolish! Deconstruct!”</br></br>The Demolition Dummy exists to take things apart. He is compelled to disassemble everything that he comes across into its component parts, leaving piles of pieces behind wherever he goes. Although he doesn’t seem to be very bright or creative, he is extremely persistent, and it’s difficult to stop him once he starts trying to deconstruct something. No matter what anyone else does, he always seems to find a way to accomplish his task.</br></br>Having the Demolition Dummy and the Robot in the same place together is like watching a perpetual motion machine – one constantly builds while the other un-builds, over and over again. No one really knows what motivates the Demolition Dummy to take everything he sees apart, but he certainly seems happy about it when he’s done…until he spots the next thing to disassemble, and then off he goes!hing to disassemble, and then off he goes! +  and Designed to immediately dismantle everythi … Designed to immediately dismantle everything it gets its crushingly powerful hands on, the Demolition Dummy sometimes has a hard time fitting in with its build-happy colleagues. That said, when anyones got a need for disassembly, from collecting spare car parts to opening a stuck jam jar, they know they can always call on the Demolition Dummy for a blank smile and a helping hand. Just don't ask it for a neck massage or anything.n't ask it for a neck massage or anything. +
Theme
Minifigures
Series 1 +
Title
Demolition Dummy +
Years
2010 +
Advertisement