Dengar is a Star Wars minifigure who first appeared as a minifigure in 2006, and was redesigned in 2011.

Dengar was a bounty hunter who worked with Darth Vader to capture Han Solo and the Millennium Falcon. He sometimes works with the bounty hunter, Boba Fett, for some occasional missions, but never completely trusted him. He flies the star ship Punishing One to travel around the galaxy. He also helped Boba Fett escape the pit of the Sarlacc on Tatooine in the Star Wars Legends continuity.

In the series, Dengar works for Graballa the Hutt, cousin of Jabba the Hutt. When Graballa leans about the Kyber Saber he sends Dengar and his minions to capture Rowan Freemaker in order to get the crystals. 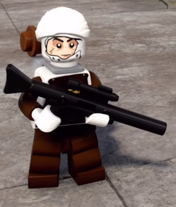