Dennis T. Nedry was a computer programmer at Jurassic Park. Due to his financial problems and low salary, he accepted an offer from Biosyn to smuggle dinosaur embryos off the island. He shut down the park's systems in order to steal the embryos and get out undetected. On his way to Biosyn. He crashes his jeep and while trying to wrench it out. He was killed by a Dilophosaurus, who spits venom in his eyes and mauls him alive in his jeep. His last name is an anagram of nerdy. 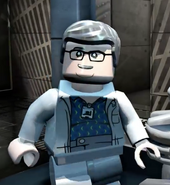 Dennis' archive recording before his death in LEGO Jurassic World: The Legend of Isla Nublar