Deputron is a minifigure released in 2014 as part of the LEGO Movie theme.

In The LEGO Movie, Deputron was with Sheriff Not-a-robot, Calamity Drone, and Wiley Fusebot to capture Emmet, Wyldstyle, and Vitruvius. He is later seen chasing them alongside the Robo Marshall only to both fall off the roof. He later appears again in a barrel when the trio escapes in the glider.

Appearance in the video game. 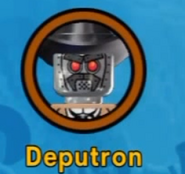 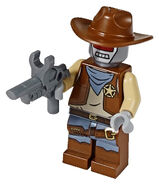 Deputron in The LEGO Movie 2 Videogame.
Add a photo to this gallery