Dexter Jettser is a minifigure featured in the Star Wars theme. He owned a diner called Dex's Diner and was a good friend of Obi-Wan Kenobi.

Dexter's Diner was the level hub on the video game LEGO Star Wars: The Video Game, with Dexter acting as a bar-tender, therefore he is unplayable. However, in the video game LEGO Star Wars: The Complete Saga, Dexter is a playable character, unlockable after the completion of the first chapter of Episode II. However, Dexter has no special abilities or weapons, and is only able to jump as well as walk around.

Dexter "Dex" Jettster was a male Besalisk with a colorful background who lived on the planet Coruscant and was the owner of Dex's Diner. Serving mostly hard workers from the area, the diner offered home-style cooked meals and freshly brewed ardees ("Jawa juice"). Jettster worked as the cook and employed two waitresses,Hermione Bagwa and her WA-7 waitress droid partner, FLO.

It was shortly before the Clone Wars that Jedi Knight Obi-Wan Kenobi came to Dex's Diner to see if his old friend, Jettster, could identify a poisoned dart. Though few even knew of the planet Kamino, Jettster did from his days as a prospector and was able to identify the dart as originating from that planet. Furthermore, he knew of the native inhabitants, the Kaminoans, who were cloners of some repute and kept to themselves but were welcoming to those who brought credits. Jettster gently chided his old friend Kenobi who as a Jedi should have put more faith in another person's wisdom than the knowledge of the Jedi Archives.

A playable Dexter in LEGO Star Wars: The Complete Saga

Dexter at his diner in LEGO Star Wars: The Video Game 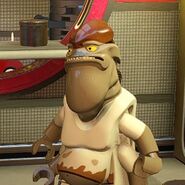