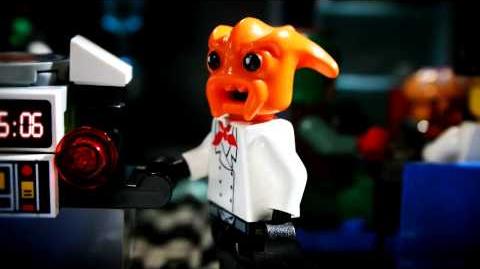 Diner & Donuts is number three in a series of stop-motion LEGO videos on LEGO.com promoting the Space Police III line.

This stop-motion video showcases the criminal Kranxx. The Space Police Officers are meeting in a small diner, discussing the latest criminal activity. They are waiting to get their breakfast when their "waiter", Kranxx, comes by and drops them a bomb instead. The diner blows up, and Kranxx gets trapped beneath a pile of food. The Space Police Officers arrest him and ship him off to Space Police Central in a Space Police Cruiser alien containment chamber. The video ends with the main officer wondering where he's going to get his donuts from now on.