This article is about the System theme. For other uses, see Dino (Disambiguation).

Dino is a System theme originally scheduled for release in 2012 but was unofficially released on November 9th, 2011 in the US. It features dinosaur models similar to the ones used in the Dino Attack theme, but more realistically designed. There are only seven sets. New moulded parts include stun guns with green tranquilizers and various species of dinosaurs. It was officially discontinued later in the same year of its release.

All the dinosaurs are made of elements with entirely-new moulds. The tranquilizer guns are new moulds similar to the Star Wars rifles but with a clip to hold a syringe in place of a fixed scope. Several new decorations are introduced for the minifigures' faces and torsos, and the sets feature an unusually large proportion of uniquely-printed pieces for things such as targeting computers. New lime-green syringe pieces have also been introduced. 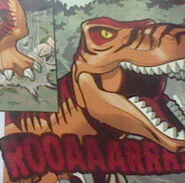 Dino in the LEGO Club magazine

A version of the Dino logo from LEGO.com that, oddly, features the Racers minifigure Motor Mike.

Retrieved from "https://brickipedia.fandom.com/wiki/Dino?oldid=1151641"
Community content is available under CC-BY-SA unless otherwise noted.