The Director, named Steven,[1] is a minifigure introduced in the Studios theme in 2000.

The Director wears a black cap, white shirt, and black trousers. He wears an orange vest printed over his white shirt, which is detailed with an ID badge and a clapperboard logo on his back. His face, which is reused from Doc from Arctic, is printed with glasses and a grey beard.

The figure is a caricature of Steven Spielberg,[2] featuring his trademark beard and glasses, who lent his name as endorsement on the first Studios set (and to the foreword of the accompanying booklet), 1349 LEGO & Steven Spielberg MovieMaker Set. This is further suggested by Backlot, wherein the Director's name is Steven and he mentions Hook. Steven Spielberg's own minifigure appears in movies and games as a light nougat-skinned variation of the Director's minifigure.

In the Time Cruisers comic, the Director is depicted with a very short temper. He furiously storms off the set after Tim and Ingo accidentally interrupt the scene that they are filming. This leaves Tim to take over his role as director.

In Running With Dinosaurs!, the Director and Cameraman are scouting locations for filming Son of Dino Cop when they discover transforming dinosaurs. As they run from the dinosaurs, the Director's priorities are repeatedly shown to be misplaced, as he focuses more upon filming the dinosaurs and titling the footage "Mesozoic Morphing Monsters" than he is about his own safety. Finally, when he thinks they are safe with a group of herbivores, he vainly boasts about the dinosaurs' inability to outsmart a Hollywood director, unaware of the dinosaurs transforming into carnivores behind him.

In Rescue From Dino Island, the Director and Cameraman are still trapped on Dino Island. They team up with the Life on Mars crew and Alpha Team agents to save the dinosaurs from Ogel's Mind Control Orbs.

In Backlot, Steven is directing the latest Johnny Thunder movie, which is rifled with problems during its production. He can be found in Stage 1, where the city scene is being filmed. He fears that the studio will take the production away from him if he cannot finish filming in time, lamenting that he will become a laughingstock and it will be even worse than Hook. As thanks for helping him resolve the movie's problems, Steven promotes the player's character to co-director.

In Island Xtreme Stunts, the Director is filming the eponymous movie on LEGO Island.

In the predraft outtakes for the Basketball Minifig Draft, the Director is revealed to be the one directing the sportscasters Rick and Bob. He has the crew fix Rick's hair, makeup, and chair, and he forces the Grip to stop daydreaming about pizza.[3] He is also visible in the audience for The LEGO NBA Challenge Championship! comic. 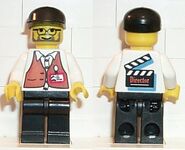 The Director's front and back printing 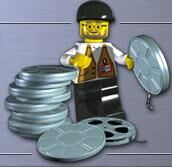 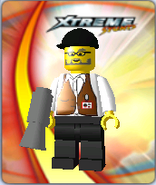 The Director in Island Xtreme Stunts

A render of the Director's Island Xtreme Stunts model

Another render of the Director's Island Xtreme Stunts model 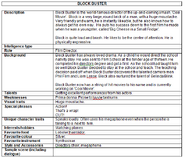