The Disco Dude is a minifigure from 8684 Minifigures Series 2.

The Disco Dude has white legs and hips. He has purple arms and yellow hands as well as a white market torso depicting a vest with buttons and a golden neckless. He has a yellow head with purple and silver sunglasses, eyebrows and a large smile with shiny teeth. Black afro hair and a flat blue 2x2 brick depicting an album with 'Brick Fever' written on it are also included in the polybag. 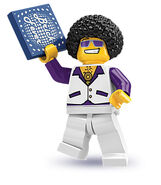 With the Lumberjack, a Series 6 minifig. 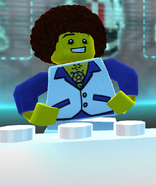 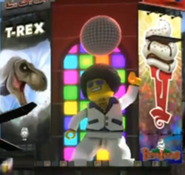 Disco Dude in LEGO City Undercover
Add a photo to this gallery
Retrieved from "https://brickipedia.fandom.com/wiki/Disco_Dude?oldid=1300784"
Community content is available under CC-BY-SA unless otherwise noted.