Dobby is a minifigure in Harry Potter theme. The minifigure was first released in the set 4731 Dobby's Release in 2002. In the year 2010, a re-designed minifigure of him was produced for the set 4736 Freeing Dobby.

Dobby is a house elf who once belonged to Lucius Malfoy. Dobby's employment to Lucius was cruel, as Lucius often beat Dobby, and influenced him to beat himself when he did something against orders. In The Chamber of Secrets, Dobby tries to stop Harry Potter from going to Hogwarts by keeping Harry's mail from getting to him, but he failed. Then he blocked the entrance to platform nine and three-quarters, but Harry Potter and Ron Weasley still got to Hogwarts in the Flying Ford Anglia. It is learned that he wanted Harry not to return to Hogwarts because he knew the danger that the Chamber of Secrets created. Later, Harry released Dobby from his evil master, by tricking him into giving Dobby a sock that Harry had been wearing, hidden in Tom Riddle's diary. After being freed, he roamed around, trying to fit in somewhere without having to work, but got bored, and started working in the Hogwarts kitchen (these scenes were only in the books). Also in the books, he had a house-elf friend named Winky, who played an important part in Goblet of Fire. Most house-elves, unlike Dobby, hate to be free and think being paid is disgusting. He is killed in Harry Potter and the Deathly Hallows by Bellatrix Lestrange when she throws a silver knife at him through the portal. 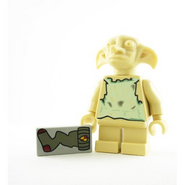 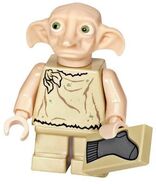 The redesigned Dobby on display at the 2010 Toy Fair. 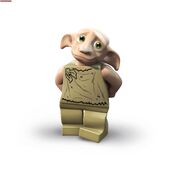 Dobby, as he appears in LEGO Harry Potter: Years 1-4. 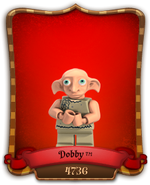 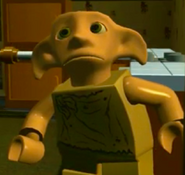 Dobby in the video game.

Statue of Dobby in LEGO Dimensions