"Thanks to a reactor core accident, scientist Dr. Alex Sartorius gained a super-hot, see-through body and the power to produce and control radiation. Now, as Doctor Phosphorus™, he uses his fearsome energy powers and his spooky visible skeleton to pursue vengeance against his enemies…and to try to find some clothes that won’t burst into flames when he puts them on!" —LEGO.com

A crack in a reactor core causes Alex Sartorius to get "five million slivers of (radioactive) red-hot sand" into his body. Nuclear reactions caused the silicon in the sand to be booted up by one proton each, to phosphorus. Burning forever, he starts a quest for revenge against the people he blames for his terrible fate, getting into conflict with Batman on a few occasions. 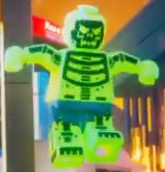