Jericho Drumm was born to a poor area of Haiti. He found his escape, travelling to America to attend school, but returned when his brother Daniel became seriously ill, and died. Respecting his brother's dying wish, Jericho sought out a Houngan priest to begin his own training. Jericho soon became a Supreme Houngan in his own right, with his pure heart and mystical strength leading him to eventually take the mantle of Doctor Voodoo. 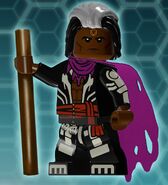