Dogpound is a Teenage Mutant Ninja Turtles minifigure released in 2013. He is Chris Bradford's mutated form. He is the only mutant known to mutate twice.

Dogpound's torso-head combination piece is a new mould released exclusively for this figure. His facial area is white with red eyes, a black nose, and yellowed teeth. On top of his head, Dogpound has two ears and spikes running down his back. On the bottom, backside of the piece, there is a curly tail that attaches to his back. Dogpound has a white stomach with a white, sixpack of muscles. On each side of the piece are knobs sticking out that the arms attach to. His left arm is very large and spiky. It is mostly brown, but the top and bottom of the piece as well as his fingers are white. Dogpound's right arm has the same colour scheme as his left arm but is significantly smaller and without spikes. His hips are black and his legs are red with a chain mail loincloth and metallic kneepads.

Born in 1979 in New York City to a rich and wealthy family, Chris Bradford was trained as a prized member of the Foot Clan and the star pupil of Oroku Saki (best known as "the Shredder"), owning a chain of dojos around the world where people could train in various martial arts classes, eventually getting recruited into the Foot if passing the ninjutsu classes. Bradford had much respect in his clan, but formed a rivalry with Shredder's street contact Xever Montes.

In the episode "New Friend, Old Enemy", when Shredder discovered his old enemy Splinter was in New York and had a clan, he traveled there and ordered Bradford to find Splinter and the turtles. Michelangelo attempted to make friends with him using social networking, but when Splinter recognized the kata Shredder taught Bradford, the plan to trick Michelangelo into showing Bradford the way to the lair was foiled. In the episode "The Gauntlet", the Kraang try to set off a mutagen bomb in New York City, and the turtles stop them, but Bradford and Montes arrive to try and kill them. When they were cornered, Bradford, who knew he had no escape, stabbed the bomb in an attempt to take the turtles down with him. Instead, the stream of mutagen spurting from the bomb missed the turtles and hit Bradford and Montes, turning Bradford into a large mutant Akita-like creature with a spiked back, a large left arm, heightened senses and superhuman strength (due to him previously getting bitten by Shredder's pet Akita, Hachiko).

After the turtles saw Bradford's new form and battled him near Shredder's lair in the episode "Panic in the Sewers", he was given the name "Dogpound" by Michelangelo. Under Shredder's orders, Dogpound was sent with the Purple Dragons to hijack a tanker truck and use the chemical inside to destroy the the Turtles lair, with Splinter inside, but was defeated when Michelangelo threw a water balloon at the spilling chemical, destroying it and sending Dogpound flying backwards. After several repeated failures while fighting alongside Fishface, Dogpound came to the conclusion that he'll never be strong and fast as he was as human. So in the episode "Mikey Gets Shellance", Karai sent him to retrieve Baxter Stockman into having him retro-mutated. However, during is fight with Michelangelo, Dgpound fell into Stockman's mutagen supply and mutated a second time into a werewolf-like mutant with bones showing.

Finally retaining his original strength and speed, he asked the turtles not to call him "dog" anymore, so he was given the name "Rahzar" by Michelangelo, who then tricked him into attacking the power generators, electrocuting himself, Fishface and Stockman in the process. In the episode "Wormquake", Shredder returned to Japan and commented that Rahzar looks terrible, but still employed him in the Foot despite his condition. 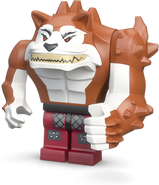 At the Toy Fair
Add a photo to this gallery