Dom de la Woosh is a Legends of Chima character. He is a nomad who is a peacock.[1]

Dom de la Woosh is a star Speedorz racer, and was considered the greatest racer of all time before ShadoWind.[1]

In "The Greatest Race Ever", he races for the most powerful golden CHI ever. He is seen throwing confetti with everyone cheering for him. All the other racers surround him gleefully, but Laval was upset that he saw him and Cragger together as if they were friends. Eris even got his signature on her wing and is attracted to him. Laval explains how he and Cragger use to watch him race then race with each other fighting for how would be "the better Woosh". During the race he was in the lead and kept on jumping off and ski, making the fans go crazy. Crooler unleashed some crazy fish into the race in an attempt to cheat. Woosh, Cragger, and Laval avoided the fish with everyone else crashing, effectively eliminating those who crashed from the race. Also, Laval, who used CHI to power up his Speedor, passes Whoosh, followed by Cragger, shocking Woosh. He then went in first again with Laval crashing in the water with the fishes. Then a hand grabbed him and Laval thought it was Dom de la Woosh, but it was ShadoWind and he raced into the game and he won. Despite the fact that ShadoWind an Cragger beat him, he still had the most applause when he crossed the finish line, even at 3rd place. He then was seen talking to Cragger after Shadow Wind raced off with the CHI. He also talked to Eris and Laval, saying he worked with Cragger only for the fans and that Laval was the best racer he had ever seen. Eris got over him and Laval became excited over what his hero said.

In Fired Up! he was seen talking to his Speedor and giving it flowers, as Stealthor watches. He is later frozen and taken by the Ice Tribes.

He is seen frozen along with other animals in Sir Fangar's collection in Cool and Collected.

He and the rest of the other animals frozen by Sir Fangar became free. 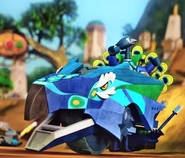 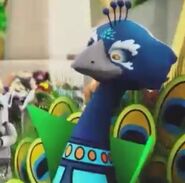 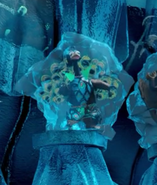