Donatello is a Teenage Mutant Ninja Turtles minifigure released in 2013.

Donatello's head is a new mould made for the turtles. It is green with a purple bandana around it. In 79105 he has a fierce grin in which the gap between his front teeth is clearly visible, but in 79101 he is frowning. He wears a new turtle shell piece that is identical to Leonardo and was made exclusively for the Teenage Mutant Ninja Turtles line. It fits around his neck, like a cape or a beard. It is khaki, has a textured turtle shell pattern and has two brown straps over the piece. The front of Donatello's torso piece is green with turtle scales and a printed continuation of the strap pieces from the shell . The back of the torso features a printed shell, even though this is somewhat pointless due to the fact that his new shell piece covers the entire back of his torso. His legs are green, just like the rest of his body, and finish off the scale printing. He also has printed brown knee pads.

Donatello (also called Donnie) is the brains of the turtle team. He is a natural inventor and electrician, knowing almost everything there is to know about technology. He would rather talk things out than fight and uses violence as a last resort. Though he is often portrayed as being more focused on his studies than ninjutsu training, Donatello has shown himself to be a very capable fighter, in particular, when he is in a life-or-death situation. He can set up plans as quickly as Leonardo, if necessary, though they usually center around one of his inventions or something else that would bar Leonardo from knowing the ins and outs of the plan in question. It is presumably for this reason that Donatello is often viewed as the level-headed second to Leonardo's command. In the TV show on Nickelodeon (on which the TMNT sets are based), his love interest is April O'Neil.

A CGI of Donatello 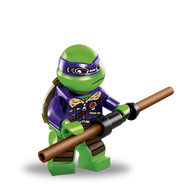 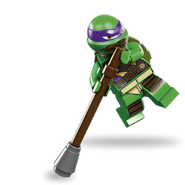 Back printing of the diving gear variant 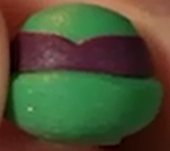 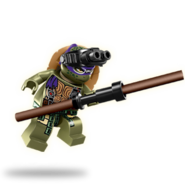 Don Movie CGI
Add a photo to this gallery