Doombots are the minions of Dr. Doom. They are designed to look exactly like Doom so that Doom can fake his own death, a trope that is now very common in comicbooks and superhero genres.

A reprogrammed Doombot was later recruited by Hank Pym to help fight a malevolent AI program he constructed. After the team dissolved, Doombot sought out his only friend, fellow teammate Victor Mancha, ultimately finding him in the Runaways' hostel base. He currently lives with the team, helping them with daily chores such as cooking and cleaning. He generally gets along with the team, though he has maintained a petty rivalry with Chase Stein. 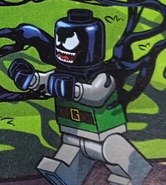