Dorothy is the main heroine of the story. Her best friend is Oz's ruler Princess Ozma. Dorothy first appears in Baum's classic children's novel The Wonderful Wizard of Oz and reappears in most of its sequels. In addition, she is the main character in various adaptations, notably the classic 1939 movie adaptation of the book, The Wizard of Oz. In later books, Oz steadily becomes more familiar to her than her homeland of Kansas. Indeed, Dorothy eventually goes to live in an apartment in the Emerald City's palace but only after her Aunt Em and Uncle Henry have settled in a farmhouse on its outskirts, unable to pay the mortgage on their house in Kansas. Dorothy's best friend Princess Ozma, officially makes her a princess of Oz later in the book series.

In the Oz books, Dorothy is an orphan raised by her aunt and uncle in the bleak landscape of a Kansas farm. Whether Aunt Em or Uncle Henry is Dorothy's blood relative remains unclear. Uncle Henry makes reference to Dorothy's mother in The Emerald City of Oz, possibly an indication that Henry is Dorothy's blood relative. Dorothy has a little black dog named Toto. Dorothy and Toto are swept away by a tornado to the Land of Oz and they enter an alternative world filled with talking creatures. She is often seen with her best friend and the ruler of Oz, Princess Ozma. Her trademark blue and white gingham dress is admired by the Munchkins because blue is their favorite color and white is worn only by good witches and sorceresses, which indicates to them that Dorothy is a good witch.

Dorothy has a forthright and take-charge character, exhibiting no fear when she slaps the Cowardly Lion, and organizing the Winkies' rescue mission of her friends who have been dismembered by the Winged Monkeys. She is not afraid of angering the Wicked Witch of the West, as shown when the Witch stole one of Dorothy's slippers, and in retaliation, Dorothy hurled a bucket of water over her, not knowing water was fatal to the witch. She brazenly rebuffs Princess Langwidere's threat to take her head for her collection — "Well, I b'lieve you won't." (Following Anna Laughlin's portrayal of the character in the popular 1903 Broadway version of The Wizard of Oz, Baum scripts Dorothy to speak in childlike contractions with Ozma of Oz, which she continues to do throughout the series). This aspect of her character was somewhat lessened by her companionship of Ozma, in whom Baum placed the greater level of wisdom and dignity. Yet even this is complicated by her associations with her cousin, Zeb of Hugson's Ranch, a rugged, manly boy who does not take well to Oz and cannot think of anything much more interesting than defeating the Munchkins' wrestling champion, which he proves unable to do.

In LEGO Dimensions, she, Toto, Scarecrow, Tin Woodman and the Cowardly Lion are first seen singing 'We're Off To See The Wizard Of Oz'. Then they are confronted by Batman thinking that the scarecrow is his world's Scarecrow, but she recommended Batman to join them singing. Then Gale and her friends are sucked by a portal to the Foundation Prime. On the planet she encountered Lord Vortech, who takes her Ruby Slippers, the foundation element from the Wizard of Oz and imprisions her and the other with Robin, Frodo, and Metalbeard.

Dorothy is seen alongside Scarecrow, Tin Man, the Cowardly Lion, and her dog Toto were they are skipping along with Emmet in arms as Rex tells him to fight the rhythm of the Catchy Song. Dorothy is then seen outside Queen Watevra Wa'Nabi's castle alongside other minifigures and is seen visibly crying after Emmet destroys the wedding cake.

Dorothy and her pals sucked away in a portal 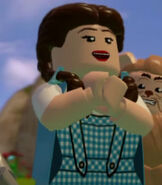 The Wizard of Oz characters in "The LEGO Movie 2: The Second Part".