Dr. Clickitt is a minifigure featured as a non-playable character in all three video games of the LEGO Island trilogy.

Dr. Clickitt is the head doctor on LEGO Island, overseeing the paramedics Enter and Return as well as his assistant Pete Bog. In the first game, Ed Mail implies Dr. Clickitt is his brother. Dr. Clickitt is also Redini's physician and has warned him not to drink excessive cappuccino.[1]

Dr. Clickitt can be found in the Hospital in LEGO Island and will ask the player if they drive the ambulance to various accident sites to pick up patients. At one point, he mentions that he's delivered nearly every brick on LEGO Island.

At the start of the PC and Playstation versions, Pepper delivers Dr. Clickitt a pizza at the hospital in order to get bricks for his house. Afterwards, he can be found wandering LEGO Island.

His only appearance in the Game Boy Color version of LEGO Island 2 is through a trading card.

Dr. Clickitt can be found at the hospital in the Game Boy Advance version of LEGO Island 2. When the player recovers the page to the Hospital, he attends to Lucky.

In Island Xtreme Stunts, he can be found at the hospital and having yoga with DJ Jackitt at the radio station. His card is hidden behind the hospital.

The character of Dr. Clickitt goes back to at least 1996, during the development of LEGO Island.[2] An early draft of the manual for the game also mentions that both Captain Click and Professor Click are of distant relation.[3]

According to the May 26th, 2000 LEGO Media International Lead Families document,[4] Dr. Clickett came from a long line of doctors, with all members of his paternal lineage known as Dr. Clickett. It also notes he had a son called Dr. Clickett in 2000.

The LEGO Island 3 Character Bible,[5] used for reference during the development of Island Xtreme Stunts, mentions that he has degrees from Cambrick University, the University of Brickridge, and Hi-Ho Highschool. It also directly specifies that Edward M. Clickitt, Ed Mail for short, is his younger brother. 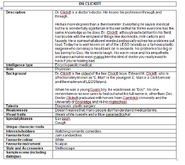 His bio from the LEGO Island 3 Character Bible.