"Just because all of my creations feature scary lasers and flame throwers doesn't make some sort of a mad scientist. It's the legion of Magma Drones, Volcano Lair, diabolical laugh and tendency to confess my evil master plan right before heroic LEGO agents escape just in time to foil them that really clinch the deal."
―Dr. Inferno's MLN account description

Dr. Inferno is the main antagonist of the Agents theme. He is an evil genius who tries to take over the world and bring the Agents to an end.

Doctor Inferno commands many henchmen and introduced a new hair and robotic arm part. His first ever scheme was to send his henchman, Saw Fist to steal an energy crystal so he could complete one of his experiments, however, his plan was thwarted by Agent Chase. His second plan was to get his thug, Break Jaw to bring him a treasure map from deep within the swamp. Agent Charge came to steal the map, before he could get to it though, Break Jaw left on his jet ski. Agent Charge caught up on his motorcycle to save the day. He then tried several evil schemes using his henchmen. At one point, he was captured by the Agents but eventually broke free. He has many henchmen who he uses to do his jobs, which is why he is rarely seen in Agents sets. He is very rich, though no one knows where his wealth comes from. He was originally an agent however after an explosion that blew off his arm, he blamed the agents for his loss and had it replaced with a mechanical one.[source?] He rose up and created his own organization and hired many henchmen that were either deformed or cyborgs. He created a laptop that had his most recent plans to take over the world, but the laptop was stolen by Agent Chase in his turbocar. After that failure, he built a giant robot that he used to terrorize LEGO City, though that scheme was ended by Agent Chase and Agent Trace. He also established a volcano as a lair, in which he created a giant laser. He once captured Agent Fuse and was about to drop him into lava, but the Agents came to the rescue just in time to end Inferno's evil plan. He dreams of the day he shall rule the Earth. It is unknown what became of Dr. Inferno, while his last plot was terrorizing the city in his robot. It is assumed he was captured by the Agents and sent to prison. 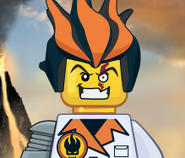 In My LEGO Network

Community content is available under CC-BY-SA unless otherwise noted.
... more about "Dr. Inferno"
RDF feed
Appearances
8635 Mission 6: Mobile Command Center
8637 Mission 8: Volcano Base
8970 Robo Attack
2856195 LEGO Minifigure Ultimate Sticker Collection
My LEGO Network
The Robot Chronicles +
ArticleRating
4 +
Image
Dr_Inferno.jpg +
InfoboxTemplate
Minifigure +
ShopDescription
Doctor Inferno's idea of fun is to create … Doctor Inferno's idea of fun is to create as much chaos as possible. He loves to build secret lairs, destructive vehicles and, of course, scary, giant robots. His twisted brilliant mind often comes up with craziest of schemes in moments making him a force to be reckoned with. Doctor Inferno has been high on the LEGO Agents list of most wanted bad guys since they formed their organization.guys since they formed their organization. +
Theme
Agents/Agents 2.0 +
Title
Dr. Inferno +
Years
2008-2009 +
Advertisement