"You were built to protect those who cannot protect themselves."
―Dr. Julien to Zane

Dr. Julien is a character of the Ninjago theme. He appeared as Zane's creator in the first season of Ninjago: Masters of Spinjitzu. Although first assumed dead, he reappeared in the second season as he was revealed to be revived by Samukai just after his death. However, Cyrus Borg mentions that he died for good in the third season.

Dr. Julien is the inventor that built Zane and the Falcon.

His origins are unknown, but he originally lived in a fortress built in Birchwood forest, guarded by a Juggernaut, built to defend to place against Treehorns. He was visited by the Master of Ice, who passed his powers on to Zane, and by Master Wu while still young enough that his hair was brown.

He spent most of his life with his "son" and he taught Zane to do many everyday things. Although Zane was created from scrap parts, he was made with a unique power source, with is currently unknown. When he was on his death bed, he told Zane he was made to protect those who cannot protect themselves and that he needed to move on to the next stage in life. Before he passed away, he switched off Zane's memory switch so he could not hurt Zane with loss.

In the next season, it is revealed that he is still alive and held captive in a deserted jail in the middle of a vast sea. It turns out that shortly after his death, Samukai visited him and revived him with a potion, forcing him to build powerful skeleton machines that would aid him in attacking Ninjago. To avoid him escaping, Samukai prisoned him on an island chained a large sea creature called Leviathan at the bottom of the sea as a guard. Due to Samukai's death, he was not freed and stayed in the prison for a long time.

In "The Last Voyage" he was meet with the Ninja and reunited with Zane. He then told them about his revival and imprisonment. He and the Ninja them fixed the broken Destiny's Bounty and escaped from the island. He has since aided and lived alongside them in the events leading to the final battle between Lloyd and the Overlord.

In the third season, it is revealed that he died from unknown reasons (it is likely his age caught up with him or the potion which revived him had wore out), and Zane secretly mourns losing him again. Cyrus Borg comforts him in hinting that he and his father knew and worked together.

In the end of the season, when Zane sacrificed himself to the Golden Master and was near his death, he remembered everything he did with his father, so Dr Julien appeared in flashbacks informing him to "protect those who cannot protect themselves.

It was later revealed that when Dr. Julien was trapped in the lighthouse, he had created a second Nindroid based on Zane's blueprints. However, he did not turn out to be as advanced as the original Zane. "Echo Zane" was discovered by Jay and Nya when they hid in the lighthouse from Nadakhan and his Misfortune's Crew.

At the end of The Dark Island Trilogy, Sensei Wu had a vision of Dr. Julien, followed by visions of Sensei Yang, Ray and Maya, and Acronix and Krux.

In Day of the Departed, Zane visits a statue of Dr. Julien located near his old lab in celebration of the holiday; it is later shattered by General Cryptor, who refers to Julien as "our [his and Zane's] dad." 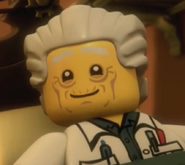 The ninjas finding him at the deserted lighthouse in "The Last Voyage".

Samukai visiting him after his death

Samukai forcing him to build vehicles for his army

Trapped in the lighthouse

The lighthouse in which he was held captive in. 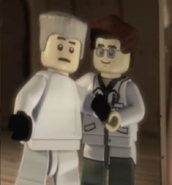 Zane with his father 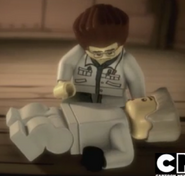 Dr. Julien, Zane, and the Falcon

Zane and Dr. Julien at mealtime

A picture of Zane and Dr. Julien and falcon