Dr. Kilroy (or Professor Kilroy), also known as various other names including Dr. Charles Lightning, Professor Articus, and Professor Titus, is a Minifigure from the Adventurers theme introduced in 1998.

In most of his appearances, Dr. Kilroy wears a white buttoned shirt, a red bowtie, suspenders, and dark green pants; this is his consistent outfit in the Egypt, Jungle, Dino Island, and China subthemes. He always wears a white pith helmet. His face is printed with large glasses and white muttonchops. Unlike Johnny Thunder, Pippin Reed, and Lord Sam Sinister, his face print remains unchanged in the Orient Expedition subtheme.

In India, Dr. Kilroy wears a green vest over his usual white shirt; his pants retain their usual green color in 7418 Scorpion Palace, but are changed to white in 7411 Tygurah's Roar. In Mt. Everest, he wears a dark grey jacket, earth orange gloves, and black pants.

When portrayed as a human in the Time Cruisers comic, Prof. Articus is initially depicted with a mustache and a full beard. His later appearance as Professor Titus has muttonchops more in line with the minifigure's printing, although his pith helmet is changed to tan.

As with all other Adventurers Egypt characters, Dr. Kilroy has used a variety of names in different regions, and has even changed names multiple times over the years.

In North America, the character was originally named Dr. Charles Lightning in LEGO Mania Magazine January/February 1998.[1] This name is retained in later issues of LEGO Mania Magazine for subsequent subthemes.[2][3] In 1998-2000 Shop At Home catalogs, he is simply referred to as Dr. Lightning.[4][5]

In the 1998 United Kingdom catalog and in Bricks 'n' Pieces March/April 1998, he is simply called The Professor most of the time.[6][7] The latter also refers to him as Dr. Charles Kilroy in the comic, despite otherwise changing the North American names from its LEGO Mania Magazine counterpart.[8]

In Germany, the character was originally named Professor Articus (abbreviated as Prof. Articus) in LEGO World Club Magazine March/April 1998[9] as well as in the audio drama Die Jagd nach dem Pharaonenschatz[10] and in the Time Cruisers comic's coverage of the Egypt subtheme.[11]

The interactive puzzle books The Curse of the Mummy and The Lost Temple are the first sources to name this character Doctor Kilroy (abbreviated as Dr. Kilroy).[12][13] This name would also be used in LEGO Adventures! Magazine[14] and The Ultimate LEGO Book. Beginning in 2000 with the Dino Island subtheme, this name would see the greatest international use, replacing region-specific names such as Professor Articus. This name is directly translated in Japan as キルロイ博士[15][16] and in Russia as Доктор Килрой.[17][18] He is alternatively called Professor Kilroy (abbreviated as Prof. Kilroy) in some sources, such as UK,[19] Polish,[20] and German[21] catalogs in 2000 and the Game Boy Color version of 5730 LEGO Island 2: The Brickster's Revenge; this is also reflected by the alternative Russian translation Профессор Килрой.[22]

When the Time Cruisers comic covered the Dino Island subtheme in 2000, he is called Professor Titus in both the English[23] and German[24] translations. This is an odd exception at the time; not only does it contradict the comic's earlier use of Prof. Articus, but also most other sources during the Dino Island theme either retained Dr. Charles Lightning or Dr. Kilroy as his name.

Dr. Kilroy would become firmly established as the character's most commonly-used name beginning with 5774 LEGO Island 2: The Brickster's Revenge, which uses this name (or direct translations) in all languages. It would be used throughout LEGO.com, including the Dinosaurs website,[25][26] the Minifig Handbook, The Restless Mummy, and The Lost Treasure of Ancient Greece, and would also be used in 5784 Soccer Mania. Finally, it was cemented as his definitive name across all Orient Expedition media. Although its spelling is largely consistent, it is alternatively spelled Dr. Killroy on My LEGO Network.

Professor Kilroy is a famous archaeologist and an expert on everything from ancient cultures to dinosaurs. Despite his age, Dr. Kilroy is willing to follow any adventure, no matter how dangerous or where it may lead. His intellect solves as many riddles as Johnny Thunder's bravery and physical strength. He is a brilliant scientist with extensive knowledge of artifacts and archaeology, but he is a little absent-minded and forgetful.

Dr. Kilroy is Johnny Thunder's uncle and taught him everything he knows.[1][3][7] By extension, Dr. Kilroy would be the uncle-in-law of Ameila and a relative of Josh Thunder. In the Time Cruisers comic, Prof. Articus is revealed to be the brother of Prof. Cyber;[11] therefore, this would also make him related to Tim Timebuster. In Die Jagd Nach Dem Pharaonenschatz, Professor Articus has a pet Indian cobra named Kleopatra.

In the interactive puzzle books, Dr. Kilroy works at the National Museum along with his friend Alex Botnik.[13] However, according to the Orient Expedition audio drama Die Suche nach dem Goldenen Drachen, he works in the London Museum and is a former colleague of Dr. Giovanni.[27]

On LEGO.com, both the Dinosaurs[25] and Orient Expedition websites have pages for fans to submit questions to Dr. Kilroy. In the latter, his consistent wardrobe is discussed; he explains that he always wears a pith helmet to keep his head warm and protect him from rocks knocked about by Johnny,[28] and he wears the same clothes every day because it is difficult to do laundry in the Himalayas.[29]

Dr. Kilroy theorized about a primitive "missing link" between bricks and minifigures. After LEGO City scientists discovered proto-minifigures from 1975, Dr. Kilroy proposed that they communicated by hopping and occasionally falling over. When questioned further about the "proto-fig" and its lack of facial features, Dr. Kilroy ran away while exclaiming that his baby T. rex was hungry.[30]

Prof. Articus has been searching for the portal to the dimension Armeron, although he is too old to make the journey himself. Articus and Miss Lovely find the Pharaoh's Forbidden Ruins but are confronted by Mr. Hates and Sly Boots. After Pharaoh Ramses forces the villains to flee, Articus requests that the mummy open the portal to Armeron, and Tim Timebuster goes in his stead.

The character later appears in the comic as Professor Titus, a time-traveling adventurer who has gone back in time to study a dinosaur egg. Tim's arrival in this timeline allows Titus to take an egg from the nest of a distracted T-Rex. He panics when Ingo starts playing with the egg, which is snatched by a Pteranodon. After retrieving the egg, Johnny Thunder and Professor Titus watch as a Baby Tyrannosaurus Rex hatches.

Dr. Lightning makes a cameo in LEGO Racers. In Circuit 2 and Circuit 5, Dr. Lightning and Johnny Thunder can be seen flying the Expedition Balloon over the Amazon Adventure Alley race course.

In the PC and PS1 versions of LEGO Island 2: The Brickster's Revenge, Dr. Kilroy appears as a major character on Adventurers' Island. In the game, he also speaks with a slight stutter and an English accent. It is revealed that Dr. Kilroy is a friend of the Infomaniac, and he eagerly helps their mutual friend Pepper Roni. He owns a Desert Speedster, which he loans to Pepper in order to reach the oasis. He is prone to heat exposure from being in the desert, requiring the adventurers to take the cooler Sea Plane so he can recover. In the jungle, Dr. Kilroy is able to speak with a T-Rex, learning that Mr. Hates has captured the dinosaurs.

In the Game Boy Color version, Prof. Kilroy has a much smaller role. He appears in the desert of Adventurers' Island, where he excitedly talks about his new magnifying glass. He is also depicted in a collectible trading card.

In the Game Boy Advance version, Dr. Kilroy only appears as a collectible trading card.

In 5784 Soccer Mania, Dr. Kilroy is the goalie for the Adventurer Explorers team. After the player beats the Adventurer Explorers in the story mode, he can be added to their custom team; this marks his only playable appearance in a video game. His stats (out of a maximum of 272) are 240 speed, 128 shooting, 128 passing, 128 tackling, and 240 goalkeeping.[31]

Dr. Killroy is a Rank 6 Networker on My LEGO Network. He is friends with Bur O Crat, Digger, and Jen Juniper, and can be friended by users who are at least Rank 4. He works with Digger and the Dino Team to excavate the Jeweled Triceratops, which is the Masterpiece required to achieve Rank 5. He often travels with Jen Juniper on his expeditions and, in his free time, he helps her in her greenhouse. 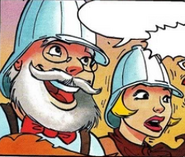 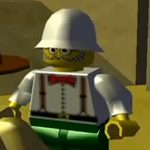 
Dr. Light … DR. CHARLES LIGHTNING<br/>Dr. Lightning decodes hieroglyphics and treasure maps using his trusty magnifying glass. Dr. Lightning is also Johnny's uncle, and taught Johnny everything he knows. But sometimes he forgets things. Several times, while out in the desert sun, Dr. Lightning has left his magnifying glass in his back pocket and burned a hole in his pants.ack pocket and burned a hole in his pants. +, The Professor
The Professor is Sam's uncle, who studies treasure maps and decodes hieroglyphics. He's a bit forgetful and keeps losing his magnifying glass! +, DR. CHARLES LIGHTNING
Dr. Lightning received a message from a friend describing a magical sun disc hidden in some jungle ruins. He was so excited, he rushed off without the letter, which Señor Palomar found. +, Dr. Kilroy
He searches the world for lost treasures. +, Johnny Thunder and Dr. Kilroy
Travelling the world in search of lost treasures! +, Dr. Charles Lightning
Dr. Lightning is Johnny's uncle, and taught Johnny everything he knows. But sometimes he forgets that the dinosaurs are real and not stuffed. One time, he almost got stomped on. +, Dr. Kilroy
Professor Kilroy is … Dr. Kilroy<br/>Professor Kilroy is a famous archaeologist and an expert on everything from ancient cultures to dinosaurs. Although he is getting along in years, Dr<sup>[sic]</sup> Kilroy is willing to follow any adventure, no matter how dangerous or where it may lead. His intellect solves as many riddles as Johnny's bravery and physical strength.as Johnny's bravery and physical strength. +, DR. KILROY


The world famous archeologist and an expert on practically everything! +  and Dr. Killroy, the celebrated paleontologist … Dr. Killroy, the celebrated paleontologist and archaeologist, has asked the Dino Team to help him on find the legendary Jeweled Triceratops. He has traveled all over the world hunting for fossils and dinosaur bones and has made many magnificent discoveries. When he's not off on a dig, he likes to help out in Jen Juniper's greenhouse.s to help out in Jen Juniper's greenhouse. +
Theme
Adventurers +
Title
Dr. Kilroy +
Txt1
Original +
Txt2
Backpack +
Txt3
India (White Legs) +
Txt4
India (Green Legs) +
Txt5
Mt. Everest +
Variations
Original
India
Everest +
Years
1998 - 2000
2003 +
Advertisement