"Who am I? I'm Dr. Rodney Rathbone, of course, leader of this mission."
―Dr. Rodney introducing himself

Doctor Rodney Rathbone is a minifigure introduced in the Monster Fighters theme in 2012. He is the central and main protagonist of the theme.

One of Dr. Rodney's legs is a regular Sand Green one, and the other is an exclusive robot peg leg piece and a new mold. They both attach into the same sand green hip part. His torso is light grey, and is printed with a white shirt, a dapper light grey vest, a dark red tie, and a gold pocket watch. His arms are white, and his hands are yellow. His face is yellow, and has printed sideburns, a mustache, and a goatee. He has a confident smirk expression. He wears a light grey bowler hat on his head.

Dr. Rodney Rathbone is the leader of the Monster Fighters and is the primary adversary of the Lord Vampyre, the main villain of the theme. An aristocrat, explorer, and the great, great, great grandfig of the first minifigure to ever walk into the Monster Realms. 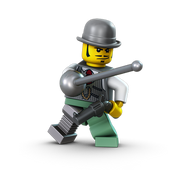 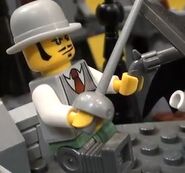 Rodney on his motorcycle 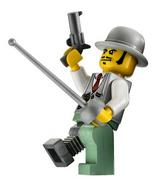 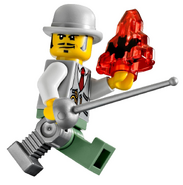 Rodney Rathbone with the moonstone