Draco Malfoy is a Harry Potter minifigure first released in 2001.

Draco Lucius Malfoy was the son of Lucius Malfoy and Narcissa Malfoy. He was a student of Hogwarts that was sorted into Slytherin upon his arrival. He became an enemy of Harry Potter soon, after he was rejected by the latter. Draco appears in Slytherin House as well as ten other Harry Potter sets. He has blonde hair and is seen wearing the Slytherin House colours of green and silver. He was almost always accompanied by his cronies, Vincent Crabbe and Gregory Goyle. In his second year he played Quidditch as a Seeker, often against Harry, trying to catch the "Golden Snitch."

Draco clashed with Harry multiple times. In their third year, Hermione Granger punched him on the nose due to him taunting Harry. In Draco's fourth year, he led a campaign against Harry as Harry competed in the Tri-Wizard tournament. In their fifth year, Draco and his fellow Slytherin cronies became Professor Umbridge's inquisitorial squad. While part of the squad, he tried to make Harry's life miserable.

Later, in his sixth year, as a result of his father's losing favor with Lord Voldemort, Voldemort assigned Draco the task of murdering Professor Dumbledore, knowing that Draco could not possibly succeed. He failed in killing Dumbledore, resulting in Professor Snape killing Dumbledore instead, although he (Snape) had been planning that particular moment with Dumbledore for nearly a year.

Malfoy later tried to capture Harry Potter during the Battle of Hogwarts, but Harry ended up saving Malfoy and Goyle when Crabbe's Fiendfyre curse began to burn down the Room of Requirement. After the Dark Lord's defeat, Malfoy married Astoria Greengrass, and they had a son, Scorpius. 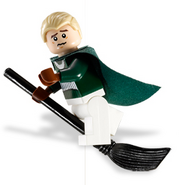 The reverse side of Malfoy's face. 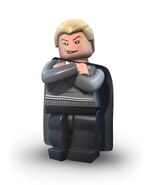 Malfoy as he appears in LEGO Harry Potter: Years 1-4.

The Sorting Hat on Draco's head.

Draco with his friends, Vincent Crabbe and Gregory Goyle 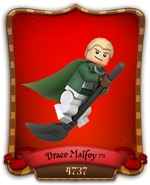 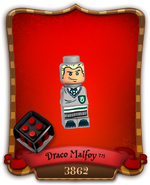