"Mess with me and you'll end up a toad - or worse!"
―Dragon Wizard

The Dragon Wizard is a LEGO Kingdoms minifigure that was released in 2010. He is rumored to be the leader of the Dragon Kingdom.

Besides different colour versions, this Wizard, now in green colour, seems to be another re-introduction of the original blue coloured wizard Majisto from the Dragon Masters theme in the 1990s and both in Castle (2007). It is also rumored that he could be mortal enemies with the Lion Wizard and the Lion King. His hat bears the crest of the dragon and is included with a spellbook open to the page that reads a spell to summon a dragon. The wizard also has a pet baby dragon. The wizard has a black beard and a brown wand. 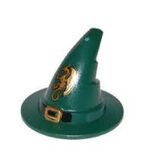 The Wizard's hat
Add a photo to this gallery
Retrieved from "https://brickipedia.fandom.com/wiki/Dragon_Wizard_(Kingdoms)?oldid=1846914"
Community content is available under CC-BY-SA unless otherwise noted.